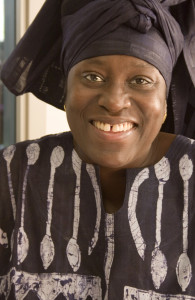 On Tuesday, February 23, New England Public Radio will host acclaimed international journalist Ofeibea Quist-Arcton for a lively conversation on her extensive career covering the African continent for major news organizations including the BBC and NPR; and the current political, economic and social issues impacting African nations today. John Higginson, Professor of History at UMass Amherst will join Ms. Quist-Arcton on stage. The event will begin 1:30 p.m. at the Commonwealth Honors College, 157 Commonwealth Avenue, at the University of Massachusetts, Amherst.

This event is free and open to the public. Seating is limited.

“We are thrilled to be one of Ofeibea’s few stops during her trip to the U.S this spring,” says Martin Miller, NEPR’s CEO and General Manager. “She is an incredible journalist, and we are happy to be able to bring her here to the UMass and the Five College community.”

Ofeibea Quist-Arcton is a journalist and broadcaster from Ghana who reports for NPR News on issues and developments related to West Africa. She spent her early years in Ghana, Italy, Britain and Kenya. She’s lived and worked in the U.K., France, Ivory Coast, U.S., South Africa and most recently Senegal, traveling all over Africa as a journalist, broadcaster, commentator and host for the BBC, The World, allAfricaGlobal Media, and NPR.

During her long career, Quist-Arcton has covered the flowering of democracy in West Africa, as well as the outbreak of civil wars, revolutions and coups, while always keeping an eye on the “other” stories about Africa that receive minimal media attention – including the continent’s rich cultural heritage.
Her recent reports for NPR have included updates on Al-Qaida operations in West Africa; efforts to battle the Ebola virus in Guinea, Sierra Leone, Liberia, and elsewhere; protests in South Africa calling for the resignation of President Jacob Zuma, and how cell phone technology, and climate change are changing farming in west Africa.

John Higginson is Professor of History at the University of Massachusetts Amherst.  He is also a Research Fellow in the College of Human Sciences and the Department of History at the University of South Africa (UNISA) in Pretoria, South Africa. He is the author of A Working Class in the Making: Belgian Colonial Labor Policy, Private Enterprise and the African Mineworker, 1907-1951 (Madison, Wisconsin: University of Wisconsin Press, 1989). Cambridge University Press published his monograph Collective Violence and the Agrarian Origins of South African Apartheid, 1900-1948 in November 2014. He has written numerous articles and book chapters on South Africa and the regional economic system of southern Africa.