Over the past few years, I’ve posted several blogs about Dizzy Gillespie. Click here for a compendium that includes features on his collaboration with Chano Pozo in the creation of Afro-Cuban jazz; his European tour with Sonny Stitt; his Bebop Reunion band; and his work with Oscar Peterson. With the Presidential campaign nearing Election Day 2016, let’s revisit Dizzy’s presidential run in 1964.

The National Endowment for the Arts hadn’t been established when Dizzy Gillespie ran for President in 1964, but it would just as likely have been on his agenda as it was Lyndon Johnson’s.  Given the names that Gillespie ruminated over for Cabinet and other administration posts, and his plan to levy a tax on jukebox operators as a way of supporting  the “hiring of live musicians,” enhanced support of music and the arts ranked high on his list of priorities.

As he relates in his autobiography, To Be or Not to Bop, John Birks Gillespie would have proposed replacing the title Secretary with the “more appropriately dignified ‘Minister’,” and he planned to name Duke Ellington Minister of State.  Miles Davis would have been offered the helm at Treasury; Louis Armstrong at Agriculture, “because he knows all about raising those crops;” Peggy Lee at Labor; Ella Fitzgerald at HEW; and Thelonious Monk as a Roving Ambassador Plenipotentiary.   Dizzy wanted Charles Mingus as his Minister of Peace, “because he’ll take a piece of your head faster than anyone I know.”  He envisioned Ray Charles as head of the Library of Congress, and joked about naming Ross Barnett, the segregationist Senator from Mississippi, head of the United States Information Agency office in the Congo.  Jon Hendricks, who wrote lyrics for the “Dizzy for President” theme, was his choice for Poet Laureate, while Mary Lou Williams, the convert who composed “Mary Lou’s Mass,” was his obvious choice for Ambassador to the Vatican. 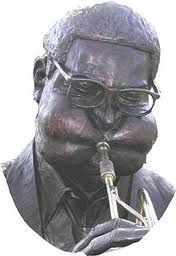 As for Dizzy’s presidential ambitions, they grew out of a novelty campaign that music publicist Al Fraser worked up for Gillespie’s appearance at the Monterey Jazz Festival.  Fraser’s agency Associated Booking Corporation issued Dizzy Gillespie for President buttons initially as a “publicity gag,” but Dizzy’s high profile involvement in the 1963 March on Washington for Jobs and Freedom led to a grass roots effort to place his name on the ballot in California.  San Francisco-based journalist Ralph J. Gleason and his wife Jean promoted a write-in campaign whose slogan read: “Gillespie for President: Because We Need One.”  Gillespie’s supporters also parodied the Goldwater campaign’s famous slogan, “In my heart, I know Diz is right.” 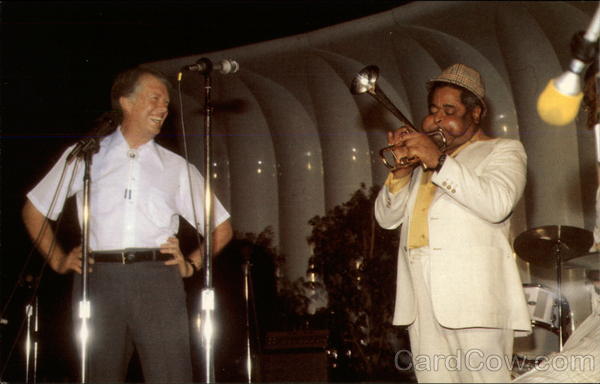 Gillespie, of course, never got to promote his ideal of “bringing together the peoples of the world so that all wars may cease,” from the Oval Office, but he headlined the White House Jazz Festival in 1978 where he and Max Roach persuaded a scat-singing President Carter to join them for an uproarious rendition of “Salt Peanuts.”  In the mid-‘80’s, Dizzy furthered his vision of world unity when he founded  the United Nation Orchestra.  Gillespie died in 1993; here’s my write-in vote for his musical legacy, may it forever transcend politics and exemplify ideals of freedom, equality and love.