Illness notwithstanding, I ventured out into the bitter cold of Saturday night for the second half of the Easthampton Jazz Festival’s nighttime lineup with the Andy Jaffe Octet; it was well worth it and apparently restorative. Andy’s group featured eight of the nine members of the nonet that he leads on his 2016 Playscape recording, Arc. The woodwind player Tom Olin has passed on since its release, but the rest of the group is intact.

Pictured above are pianist Andy Jaffe; French horn player John Clark; bassist Marty Jaffe; bass clarinetist Bruce Williamson; alto saxophonist Kris Allen; drummer Jonathan Barber; trumpeter Wallace Roney; and saxophonist Jimmy Greene. Andy pulled out a few gems from previous albums, including a personal favorite, “So You Say,” and played several works from Arc, including “Steve Biko,” a memorial to the South African anti-apartheid leader that Max Roach premiered in 1980, and “Fear of the Dark,” a Latin-inflected work dedicated to the plight of newly-arrived immigrants in the U.S. 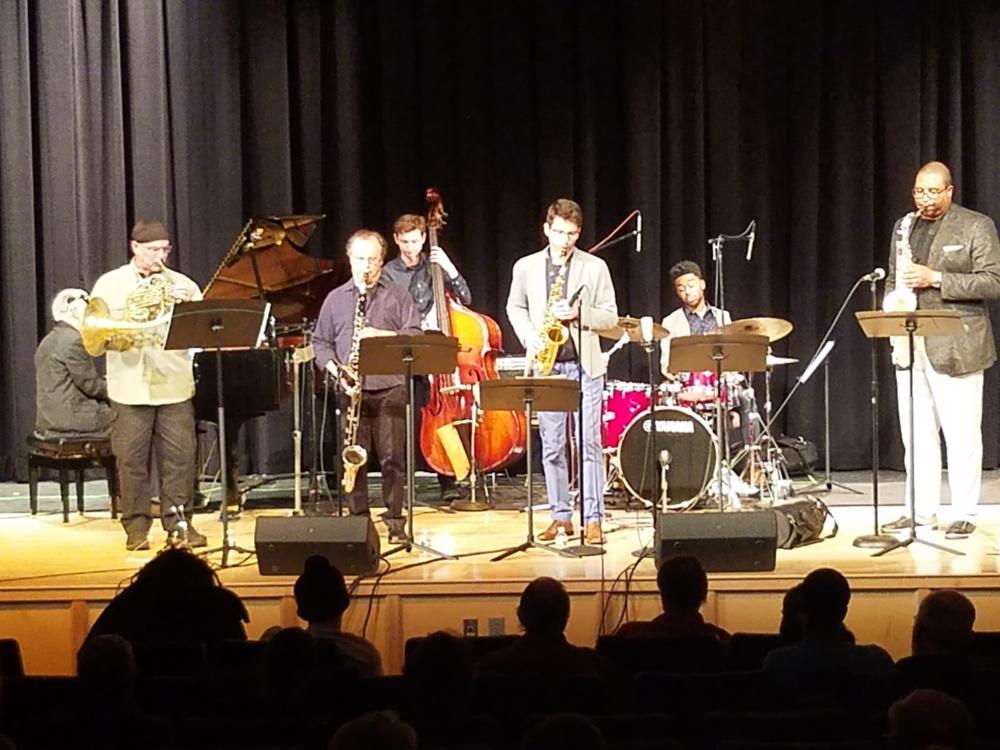 The music brought Charles Mingus and Gil Evans and Miles Davis to mind, and included Andy’s elaboration on Duke Ellington’s “Fleurette Africaine,” which he calls “Fleurette Chinoise.” Turnout was excellent at Easthampton High School’s auditorium and that augurs well for this as an annual day/night event. Kudos to Carol Abbe Smith and her posse of volunteers. Andy’s kind of a local hero, but his music is as engaging as anything I hear today, so here’s my wish for venues near and far to pick up on it.