Today is Frank Wess’s 95th birthday anniversary. He died just over three years ago, October 30, 2013, and since then his colleagues Clark Terry and Joe Wilder have also passed on. They’d been the last surviving members of Count Basie’s great big band of the 1950’s, the so-called New Testament band, and Wess was the last saxophonist in the Count’s realm to have had a direct link to Lester Young, and to the glorious tenor tradition of the Swing Era.

Over the years, Wess was rightly celebrated not only for his longevity but for the brilliance of his playing right till the end of his 91-year-long life. Here he is with Scott Robinson at Birdland in 2009 playing one of the standards of the two tenor tradition, the Gene Ammons-Sonny Stitt classic, “Blues Up and Down.” It’s hard not to marvel at the quality and power of Frank Wess, who was still tearing it up decades after he did the same for Basie.

Three years ago, Robinson recalled Wess as “someone I have looked up to my entire musical life. A source of immeasurable inspiration and guidance, as well as friendship. An American treasure. I last saw him less than two weeks prior, before I went on the road, and I knew it would not be long. But as my friend Maria Traversa said to me, ’91 years of doing what you love is a pretty good life.’ For me this is a very personal loss. I worked closely with Frank on many concerts, tours and recordings, and we even started a band together – at his urging – back in the early nineties. I am incredibly grateful for the time I have known Frank Wess, and for all that he has given me. I will miss him more than I can say.”

In Stanley Dance’s indispensable chronicle, The World of Count Basie, Wess recalled, “When I started on tenor, I liked Chu Berry and Ben Webster, and I’d known Don Byas from the time I was ten years old in Oklahoma. He went to Langston University in Oklahoma, and I went out there during the summer, studying saxophone. He led a band there and he always played the same way. But Lester Young impressed me more then.  He was my inspiration.”

Young, of course, was an inspiration to an entire generation of saxophonists, including Charlie Parker. In his biography of Parker, Kansas City Lightning, Stanley Crouch says that Bird had a “breakthrough” one night listening to Young playing with Basie at the Reno Club in Kansas City.  “He began to understand what the tenor saxophonist was doing, and he broke out into a cold sweat. From that point on, Charlie Parker came under the sway of that tall, light-skinned man who held his horn out to the side and pumped his ideas into the air.” 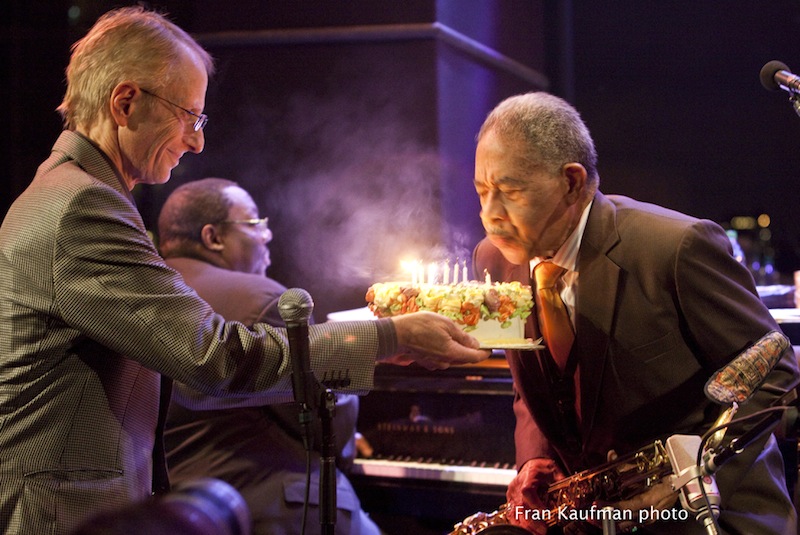 Frank Wess was born in that same Kansas City musical hot house that was a launching pad for Basie, Pres, and Bird, but his family moved to Oklahoma when he was in grade school, and then to Washington, D.C., where his father worked as a school principal and his mother was a music teacher. Wess landed a job playing alto saxophone with the house band of the Howard Theater, and at pianist John Malachi’s suggestion, he switched to tenor. Billy Taylor was a classmate of Wess’s in high school, and they later worked together in the television house band that Taylor led for the David Frost Show. (Here’s Dr. T referencing his experience playing on 52nd Street in the mid-40s with Ben Webster as he introduces Wess as the guest soloist for a performance of “Lush Life.”)

As it happened, D.C. was also where Wess had a significant encounter with his tenor-playing hero. “I jammed with [Lester] in Washington, and he showed me a lot of things about the horn, and how to make some of the sounds he got that other people were not making. For a long time I played more like him and sounded more like him than anybody, and I played nearly everything he recorded. Then one day a friend of mine, just a guy who liked music, came around where I was playing matinees in Baltimore. ‘You know what?’ he said. ‘You sound just like Prez. You’ll never get any credit for that. Everything you play just makes him bigger.’ That made sense to me and I gradually changed.”

Crouch notes that the kind of access Wess enjoyed with Young was something Bird didn’t experience in Kansas City. “He would never have the moments of direct communication that fellow saxophonist Frank Wess did a few years later in Washington, when he and a buddy went to Young’s hotel to pay their respects, and were called up to his room, where the tenor saxophonist greeted them in his long underwear, hat atop his head, cigarette case filled with reefers, and his horn out. As the young musicians sat rapt before him, Lester Young shared a lifetime’s worth of lessons: alternate fingerings, breathing techniques, advice on tone production, the great man a light-skinned Oracle right before them. No, none of that for young Charlie. His unrequited apprenticeship ended when Basie took Pres off to New York City [in 1936]. He would have to find another mentor.”

Crouch also reports that Wess had a D.C. connection with Biddy Fleet, the legendary guitarist whom Parker jammed with at Dan Wall’s Chili House in Harlem around 1940. Fleet was reputedly the guitarist Parker was playing with when he made his breakthrough while jamming on the chord changes of “Cherokee.” Referring to Fleet’s mechanical aptitude, Wess said, “Biddy liked to figure out how things worked…The touch and the mind, he was born with it. It was a gift.”

Wess came to prominence paired with Frank Foster on “Two Franks,” “Two for the Blues,” and “Blues Backstage,” in Basie’s newly resurrected big band in 1953. The two Franks carried on the two-tenor lineage that Basie instituted with Young and Herschel Evans in 1936. Billy Eckstine’s mid-40s orchestra made a more formalized ritual of tenor battles with duelists Dexter Gordon, Sonny Stitt, and Gene Ammons. Following service in the Army during World War II, Wess joined Eckstine in 1946 when Ammons, as well as Fats Navarro and Miles Davis, were still with Mr. B. He then worked with pianist Eddie Heywood and the legendary jump blues bands of Lucky Millinder and Bullmoose Jackson.

In 1949, under the G.I. Bill, Wess returned to D.C. to study at the Howard University Music School. There he concentrated on flute and arranging.  He told Stanley Dance: “I had heard [flutist] Wayman Carver when those records by Chick Webb first came out [in 1936]. I was always interested in flute, but then I didn’t have a teacher.”

By the time Wess joined Basie in 1953, the flute was about to gain prominence in jazz through the work of Wess, Sam Most, James Moody, Jerome Richardson, and Herbie Mann. Basie recalled his decision to feature the instrument in his autobiography, Good Morning Blues. “That was the time when the new thing we went [into Birdland] with was Frank Wess playing the flute…Frank was an excellent flute player, but he had been with us for a little while before I found that out. Don Redman hipped me to him. We were uptown playing a gig somewhere, and Don came by and asked me how Frank was doing, and he said, ‘Has he played anything on the flute for you yet?’ And I said, ‘Well, I didn’t know about that.’ And Don said, ‘Why don’t you try him?’

“So one day at the Savoy we were doing a jam and I told Frank, ‘Why don’t you take a couple of choruses on your flute?’ And he looked surprised. ‘You really want me to?’ I said, ‘Yeah, take a couple and let’s see what happens.’ So he went out there and played and broke it up, and as soon as I heard him, that was when I realized that we had a new thing to go back down into Birdland with. So that’s how the flute things started, because it seemed to me that it excited just about everybody that came down there. ‘Hey, what is that?’ they said. ‘What’s he doing, jazzing the flute?’ And not long after, everywhere you looked, here come the flutes. Here come the flutes. Here come the flutes. Arrangers started leaving special spots for flutes. Later we also began to feature flute duets and little flute ensemble passages. We still do. They can put something different in somebody else’s books, but Frank Wess is the man who really brought the flute into the jazz scene beginning right down there in Birdland.”

Basie cited a Carnegie Hall concert in 1954 to illustrate how essential Wess was to his success. The Carnegie Hall lineup included Billie Holiday and Sarah Vaughan, The Modern Jazz Quartet, Charlie Parker and Lester Young. “For our own spot, Frank Wess did his thing on “Perdido,” with his flute on the first solo and his tenor on the follow-up, and then we sent both Franks out there together on Neil Hefti’s “Two Franks,” and of course they tore it up.”

Fifty years later, Wess was the most famous Basie-ite to tour with a band celebrating the Count’s centennial in 2004. The band headlined that summer’s Litchfield Jazz Festival, which I emceed and made the request of Frank that he take a picture with me. Here he is with a band of Basie alumni in the 1980s performing Ray Noble’s famous ballad, “The Very Thought of You.”

At the time of Wess’s death, baritone saxophonist Gary Smulyan sent along this moving appreciation.“Magic is gone. What a huge loss to the world of music. I had the great pleasure of sitting in the saxophone section with Frank in both the Carnegie Hall Jazz Band and the Philip Morris Superband for many years and on many occasions. His playing was always heartfelt and soulful, and his way with ballads could make you cry and shake your head in disbelief wondering how a person could cajole that much spirit from a saxophone. He was one of the last great storytellers in music and an old school raconteur who often had us all on the floor laughing over his stories about being on the road and his experiences as a musician before many of us were even born. He knew and played with all of our musical heroes, Lester Young, Bud Powell, Count Basie, Billie Holiday, Sarah Vaughan, Louis Armstrong, Duke Ellington, Charlie Parker, and the list goes on. With his passing we lose another one of the true originals and we are truly blessed that he left behind such a beautiful legacy of music and humanity.”

Here’s Wess in 2009 with another keeper of the flame, pianist Barry Harris, and bassist Rufus Reid, playing “Never Let Me Go.”