Of all the seemingly endless variety of popular music styles in Africa, perhaps none has managed to have its influence felt across the entire continent than the music emanating from both sides of the Congo River, which separates the Republic of Congo (Brazzaville) and the Democratic Republic of Congo (Kinshasa). And perhaps no artist has quite influenced the Congolese music scene than Luambo Makiadi, aka Franco.

Along with his band T.P. O.K (Le Tout Puissant Orchestre Kinois ) Jazz Band, Franco dominated that scene and beyond for more than thirty years, from the mid-1950’s until the late 1980’s. In fact, Franco is among just a handful of African artists (fellow Congolese Tabu Ley Rochereau, Miriam Makeba and perhaps Fela Kuti also come to mind) whose popularity extended across the entire continent, particularly sub-Saharan Africa. 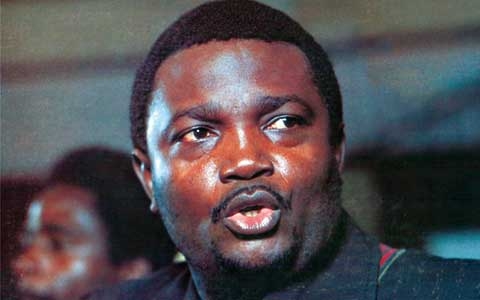 During the 1980’s, Franco’s reputation was beginning to reach North American audiences beyond the relatively small community of Africans and world music aficionados. In 1987 he recorded  “Attention Na SIDA”(the French acronym for AIDS), a 16-plus minute ‘song speech’ that boldly challenged all sectors of society at home and abroad to address the scourge that had begun to infect and kill millions of people since its discovery earlier in the decade. Beyond it danceable rhythms, its direct lyrics were the first by an African artist to strike a blow against the stigma and denial that was so prevalent.

It would also serve as Franco’s epitaph. The song was recorded around the time rumors began to circulate over Franco’s dramatic and rapid weight loss and sometimes emaciated looking presence on stage. And while he never publicly acknowledged that he had the disease, some viewed the song as close to an admission as he would ever give.

His oratory (sermon might be a better word!) in French was a call to arms, if you will, while the chorus that he and his fellow singers vocalized in Lingala decried the condition of one who had fallen ill to the disease and had become an outcast to friends and family. In October 1989, Franco died in a Belgian hospital from AIDS-related complications. A generation after his death, the song and its message remains, in my opinion, the most poignant and powerful musical statement about AIDS I’ve ever heard.