The only extant footage that’s been discovered of Clifford Brown is from his appearance on “Soupy’s On!” the television show hosted by Soupy Sales at WXYZ in Detroit in the mid-fifties. Notwithstanding his compulsive goofiness, Sales was a passionate jazz fan who befriended many musicians, and whenever he ran into Max Roach he’d remind himself to look for a kinescope of Clifford Brown’s appearance on the show. As it happened, it took thirty years to surface. Brownie’s biographer Nick Catalano reports that he was at Max’s apartment in New York shortly after the tape arrived in 1996, and they watched it together. “We sat there marveling at the quality of this bit of early television and the sight of Brownie conversing with Soupy was enough to make us both teary-eyed.”

Detroit was a frequent stop for the Brown-Roach Quintet, and during the week of February 20, 1956, the band was working at the Rouge Lounge. By this time, Sonny Rollins had joined Brown-Roach, Inc., and in the first three months of 1956 they recorded At Basin Street, the only one of the quintet’s Emarcy albums that featured the great tenor saxophonist. The group also recorded under Rollins’s name for the Prestige release, Sonny Rollins Plus 4. Alas, with Brownie’s tragic death in a car accident on June 25 of that year, the Rollins date of March 22, 1956, proved to be his last studio recording.

The Cotton Club in Cleveland was also a regular stop for Brown-Roach. Click here to hear Brownie’s introduction of the group at the Cleveland venue (pictured below), and note the modesty with which he says, “I play the trumpet. My name is Clifford Brown.” 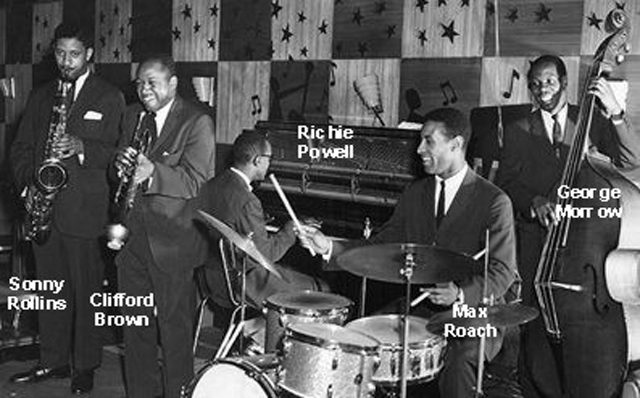 Brown was among the most beloved musicians, and the warmth and beauty that issues from virtually every note he played in his brief career is also evident in his response to Soupy’s mention of his newborn son. Now 57 years since his death, Brownie still prompts speculation over the direction his music might have taken had he lived beyond his 25 years, and the impact he may have had on the stylistic evolution of jazz. Thankfully, he left a substantial body of recordings as well as this filmed performance of “Lady Be Good” and “Memories of You.”