When I posted a feature (linked below) about Scott Hamilton on his 60th birthday two years ago, Duke Robillard wrote a note of appreciation for the saxophonist in which he said, “Of all the musicians I know, Scott is not just the keeper of the flame, but actually the flame itself…A soul intent on playing beautiful melodies and echoing the sounds of the greatest exponents of his instrument while being perfectly himself, reinventing the form of classic jazz over and over, each decade adding new twists and subtleties to his style and continuing to grow all the while. Who else does that and still keeps the classic repertoire alive and vital?”

Hamilton tends to be a man of few words, but last night, as I watched him and Robillard at Chan’s in Woonsocket, Rhode Island, I was struck by the joyous expressions that came over his face as he listened to Duke’s inventive solos and full-bodied, propulsive accompaniment. The tenor saxophonist conveys a sense that the bandstand is not only his workplace but his most easeful social sphere, so the rare occasions when he shares it with his old friend obviously mean a lot. 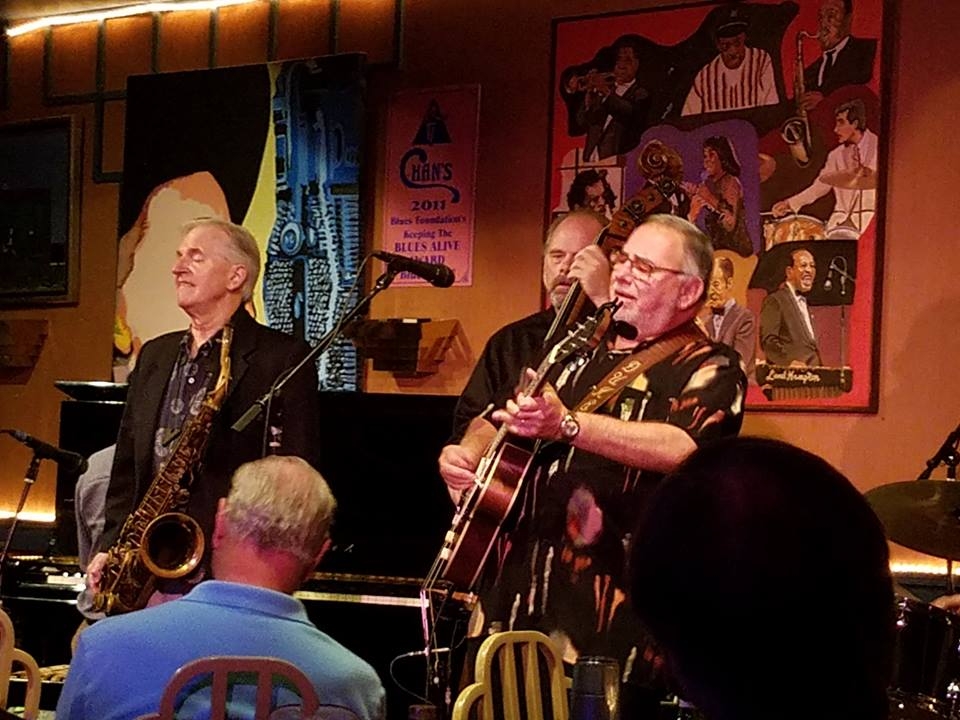 Robillard is one of the most esteemed guitar players on the planet. His mastery encompasses an amazing range of idioms, from swing, jump blues and rockabilly to country, Delta blues and rock’n’roll– for all I know, he may play Segovia-style at home– and he’s impressed me for decades as one of the most complete masters of the American vernacular. Actually, there’s hardly anyone who compares, and I’d venture to say that if every trace of the nation’s home-grown guitar styles was suddenly lost, the Woonsocket native who’ll turn 68 on October 4 would be the obvious choice as the man to resurrect them all.

Duke’s also singular in the array of artists he’s worked with over the years, from Herb Ellis to Ronnie Earl; Jimmy Witherspoon to Jay McShann; Ruth Brown to Roscoe Gordon; Billy Boy Arnold to Pinetop Perkins; Maria Muldaur to John Hammond; Tom Waits to Bob Dylan; Robert Gordon to the Fabulous Thunderbirds; David Grisman to the New Guitar Summit with Jay Geils and Gerry Beaudoin. He’s lately begun to exhibit his work as a photographer, much of which is devoted to candid performance photos and portraits of musicians.  Click here for Duke’s photography.

While Duke is six years Hamilton’s senior, they’ve been friends since they began poring over Scott’s father’s record collection in the sixties (Robert Hamilton was a painter and teacher at the Rhode Island School of Design) and a mutual admiration society since Scott was in his mid-teens emulating Little Walter as a harmonica player in blues bands around Providence and Duke was the twenty-year-old frontman and creative force behind Roomful of Blues. Hamilton played a solo on Roomful’s debut release, and since then they’ve reunited on albums under each other’s leadership, Scott with Duke on the Rounder album Swing (reissued on Duke Robillard Plays Jazz), and Duke with Scott on Across the Tracks; Blues, Bop & Ballads; and the 2014 release, Remembering Billie. On the latter, Duke’s subtle chording on a pair of Lady Day ballads (“Foolin’ Myself” and “I’ll Never Be the Same”) came to mind at Chan’s as he strummed quietly in accompaniment to Marty Ballou’s bass solo on “Robbins’ Nest.” This oft-overlooked aspect of guitar playing is an art form unto itself in the hands of sophisticated players like Robillard.

The same applies to Hamilton. While he and Duke are much more than conservators (a typecasting made only by those in search of something other than beauty), few rival Scott as the living embodiment of the tenor tradition associated with icons like Coleman Hawkins, Ben Webster, Lester Young, Illinois Jacquet, and Zoot Sims, and second-tier legends Don Byas, Ike Quebec, Julian Dash, and Flip Phillips. Scott’s big, warm sound was unmistakable from early on, and his solos continually impress for their thematic flow and structure. He’s called his own shots since his celebrated arrival in New York in 1976, which in jazz terms means he’s made a career as a globe-trotting nightclub performer and prolific recording artist; Hamilton completists are continually challenged to keep up with his output for labels worldwide. However, like Houston Person, who played a rousing set in withering heat at Northampton’s modestly attended Retrofaire on Saturday, Hamilton is rarely booked at the major jazz festivals or profiled by critics, but chalk that up to a jazz culture that favors the latest over the greatest.

Tony Bennett marked his 90th birthday in August with a performance on Late Night With Stephen Colbert of “This Is All I Ask.” The Gordon Jenkins ballad takes on increasing poignance with a performer’s passing years, so it was a natural for Frank Sinatra’s 1958 album, September of My Years. Hamilton, who’s been an old soul since he first picked up a horn over fifty years ago, is seen above playing it in Norwich, England. Today is Scott’s 62nd birthday.