Many years ago…MANY!…I helped open a Classical Music store in my hometown of Milwaukee, WI. It was an offshoot of Radio Doctors, a big store that sold records and audio equipment on Wells Street in the city’s downtown. What an experience! When we opened the doors, the smell of fresh paint and new wood shelving was intoxicating – almost as much as the sight of thousands of Classical Music LP’s on shelves and in bins in the lovely, brightly lighted and carpeted space. It was where, as a stocker & clerk, I learned which orchestras and conductors recorded on which labels, and which performers had the latest recordings out. We used the Schwann catalogue to find exactly the right recording for each customer, whether in-store, or direct-ordering from the labels. It was a truly wonderful experience, helping lay the groundwork for my eventual career in classical radio. So it was interesting to come across this reflection by Mark Obert-Thorn on what it was like to grow up as a classical music record collector in Philadelphia when you still COULD “shop” for LP’s in an actual store….

I started buying classical records around 1973, when I was still in high school. At first, I got them at the suburban malls out near where I lived. But on the special occasions when I’d go in town, my favorite record store was Franklin Music. They had two locations on Chestnut Street, both of which eventually became Sam Goody’s: one at 11th, and another at 8th. The first one was bigger, but I preferred the other one because of the special treasures they had there. That store had a separate browser devoted to imported LPs, and it was there that I first was able to get many historical reissues that I had heard about, but hadn’t seen anywhere else, on World Record Club, Electrola’s “Da Capo” series, and others.

Another reason I liked Franklin Music was for its regular sales, where I could get entry-level budget reissues on Victrola, Odyssey, and Seraphim for as little as $1.79 per disc. (I remember that figure, because their clerks at the checkout counter used to cut the lower right-hand corner of the back of the LP shrinkwrap with a razor blade and write the price there in pen!) Best of all were their annual half-price classical sales. My friend Jim, who was a Mahler fanatic, got Rafael Kubelík’s set of the complete symphonies on Deutsche Grammophon in a deluxe white, fabric-covered box for $25, an incredible bargain at the time.

Another favorite haunt, especially after I started working in Center City and could spend my lunch hour browsing for records, was H. Royer Smith. I didn’t know Royer’s back in their glory days at 10th near Locust St., where older collectors told me they would still be able to look through stacks of 78s even into the 1960s. I only knew it in its final location around 21st and Walnut. It was a great place for finding still-sealed copies of long-unavailable LPs which they still kept behind the counter for their mail-order business.

The other great thing about Royer’s were the used LPs they had out in the browsers. I’ll never forget the day I went in there, hoping against hope that they would have a copy of Fritz Reiner’s Pittsburgh Symphony recording of the Gershwin-Bennett Porgy and Bess Suite on a 10-inch Columbia LP back in the stacks, still unsold since it went out of print in the ’50s. They checked, but couldn’t find one, so I started rifling through the used LP browsers, when lo and behold, there it was! What are the odds? Those bins were also the scene of my biggest record-collecting regret. I passed up a copy of another Reiner recording, Strauss’ Also Sprach Zarathustra with the Chicago Symphony, one of the earliest RCA “Living Stereo” recordings (LSC-1806), in a coveted “Shaded Dog” label pressing in excellent condition for a dollar – because I already had it on Victrola in a Dynaflex pressing! (Argh!)

Finally, Royer’s was the only record store I knew that published its own monthly review magazine, The New Records. The reviewers, some of them Royer sales clerks, knew what they were writing about, often using pseudonyms for their articles. I recall that the wonderfully-named critic Levering Bronston turned out to be none other than affable Royer employee Howie Kornblum.

The tradition of knowledgeable sales staff in a small store was carried on by Nathan Muchnick’s at 17th and Chestnut. During the 1990s, their buyer was an extremely well informed Penn law student from, I believe, Australia – although he spoke with a perfect British accent – named Simon Roberts. At lunchtime, collectors would converge in Muchnick’s basement classical department to discuss with him, and with each other, the new releases. That’s the kind of interaction you’ll never get online, and which I’ll miss.

Another thing I’ll miss that you can’t find on the Internet are personal appearances in record stores. I recall walking into the HMV store at 15th and Walnut sometime around 1999 and being surprised to hear a lunchtime mini-recital with Philadelphia-based pianist Marc-André Hamelin, who was performing the Liszt Second Hungarian Rhapsody with a wild cadenza I had never heard before. On another occasion, back in 1980, I went into the Sam Goody’s store at 11th and Chestnut for a record signing with Riccardo Muti. I was amazed that at the height of lunch hour, the place was nearly empty. I recall thinking to myself, “If this were Tokyo, the line would be going down the street. We don’t appreciate what we have here . . . ”

Shops devoted to records were not the only places to find interesting selections and bargains. Back in the day, the bigger bookstores with record departments were also a regular destination for me. I can’t forget the late, lamented B. Dalton’s store at 16th and Chestnut (closed due to the One Meridian fire next door and never reopened), nor the Barnes & Noble location in the old Jacob Reed’s building across the street. Looking down from the classical department on the second floor toward the rear of the store, you could see the wonderful original stained-glass windows on each end of the building. And the big Borders store at Broad and Chestnut, catty-corner to the main Tower Records store, used to have a nice selection of CDs, as well.

Best of all for selection was Tower – for me, not so much the flagship store on Broad, although that was great, but the Classical Annex that used to be at 6th and South during much of the 1990s. That store, a former Kresge’s five-and-dime, was filled with row after row of classical CDs – imports, cut-outs, you name it. I remember taking the head of England’s Pearl Records there when he visited Philadelphia, to show him what an incredible array of choices we were fortunate to have in our city.

When the main Tower store folded, I was heartened that F.Y.E. moved in and, initially, kept nearly as much floorspace for classical as their former tenant had. This dwindled over time; but for the past several years, it stood as the very last big record store, not only in Philadelphia, but also on the entire Eastern metropolitan corridor, from Boston to Washington, D.C. One by one, they fell like dominoes, their names like a roll call of the glorious dead: HMV, Virgin, Goody’s, Record Hunter, King Karol, Serenade. “Look for them in books, for they are but a dream remembered.”

Mark Obert-Thorn is an audio restoration engineer who grew up in Rhawnhurst and Huntingdon Valley and now lives in North Wales. 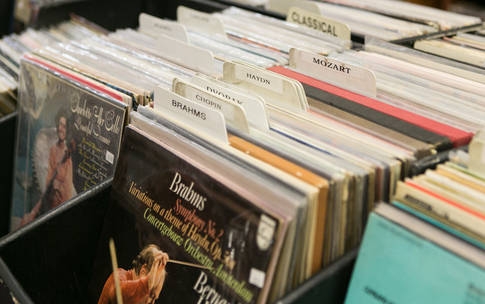