I feel as moved by Johnny Hodges today as I did when I first heard him on record nearly fifty years ago. The album was Duke Ellington’s memorial for Billy Strayhorn, …And His Mother Called Him Bill. I was about 16 when I purchased it at M. Steinert & Sons on Main Street in Worcester, Massachusetts, and when I got home I decided to begin with Side B because it opened with a tune intriguingly titled, “The Intimacy of the Blues.” The arrangement consisted of a series of twelve-bar statements by Ellington, trombonist Lawrence Brown, Hodges, and trumpeter Cat Anderson. Though it was brief, Hodges’s solo pulled me right in with its directness, its soulfulness, its intimacy. And as I continued listening to the album devoted to Strayhorn’s compositions, I was touched by the elegiac feeling that permeated Hodges’s playing as he paid last respects to a man who’d written some of the most exquisite melodies in American music with him expressly in mind.

Johnny Hodges was born 110 years ago today, July 25, 1906. A giant of jazz in his own right, he was the most famous of Ellington’s sidemen, and it was long said that Duke was the envy of bandleaders far and wide for what he acknowledged as “the privilege of presenting Johnny Hodges for forty years, night after night.” Notwithstanding a four-year run as the leader of his own combo in the early fifties, the Cambridge-born, Boston-raised saxophonist worked with Ellington from 1928 until 1970. Strayhorn was there between 1939 and ’67.

Ellington composed and arranged dozens of pieces that showcased Hodges’ powerful blues playing and his peerless artistry on ballads, many of which were fashioned from licks and melodic ideas first played by the saxophonist. Hodges helped popularize such Ellington songs as “Warm Valley,” “Prelude to a Kiss,” “Don’t Get Around Much Anymore,” “I Let a Song Go Out of My Heart,” “Things Ain’t What They Used to Be,” “Sentimental Lady,” and “Come Sunday.” And several of Strayhorn’s best-known works, “Day Dream,” “Passion Flower,” “Grievin’,” “After All,” “Blood Count,” “Isfahan,” “A Flower Is A Lovesome Thing,” and “The Star-Crossed Lovers,” were immortalized through Hodges’s extraordinary lyrical skills. 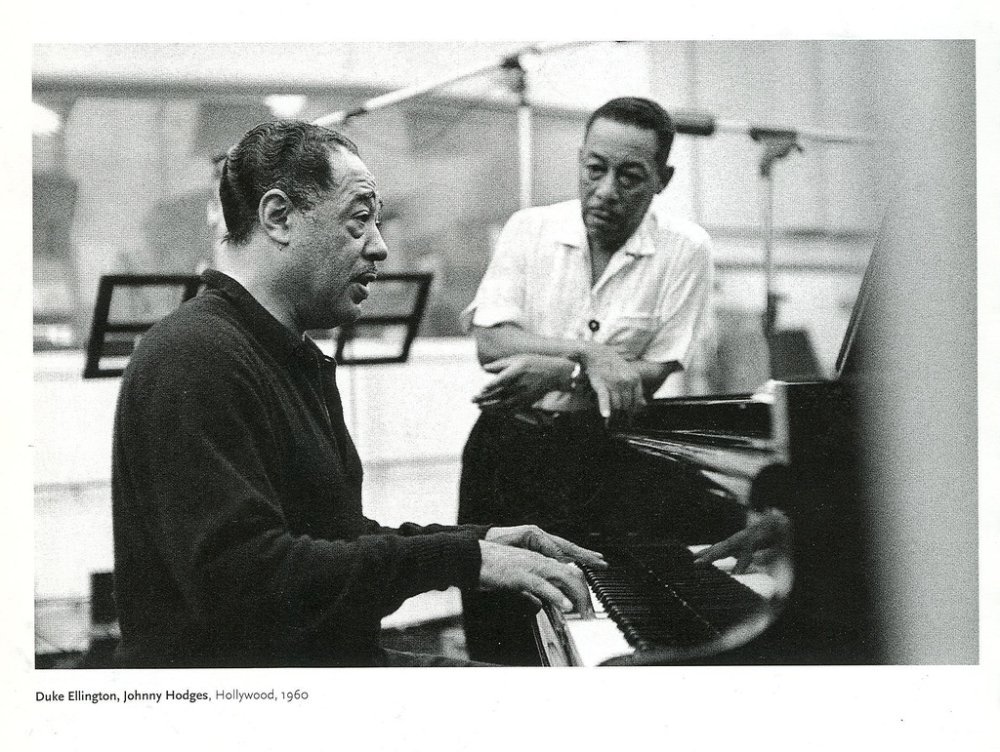 In The World of Duke Ellington, Stanley Dance’s indispensable chronicle of Ellingtonia, Duke said, “Johnny Hodges has complete independence of expression.  He says what he wants to say on the horn and that is it. He says it in his language, which is specific, and you could say that his is pure artistry.” When he died, Ellington said, “Because of this great loss, our band will never sound the same…May God bless this beautiful giant in his own identity.”

Known by the dual nicknames “Rabbit” and “Jeep,” Hodges’s admirers were a diverse lot. Clark Terry echoed Ellington in saying, “Above all, he’s always true to himself.” John Coltrane, who began his career playing alto saxophone, cited him as his first influence and he was a sideman in Hodges’s septet in 1953. In a 1960 interview with Downbeat, Trane said, “He still kills me.” Coltrane remembered the band for its “true music. I never forget that. It really swung.” Paul Gonsalves noted that “he has remained himself all along…his style has that basic, earthy quality which really endures.” Lawrence Welk, whom Hodges recorded with in 1966, said, “He plays from the heart rather than from the notes…and he plays the prettiest saxophone of anyone I know.” Welk would surely have appreciated Charlie Parker’s description of Hodges as the “Lily Pons of his instrument.”

Hodges’s blues playing ranged from sensual and yearning to mocking and sardonic. His very last recording was “Blues for New Orleans,” the opening movement of Ellington’s New Orleans Suite. He died shortly afterward during a visit to his dentist on May 11, 1970. At 63, he was still playing the blues with complete conviction.

In 1952, Norman Granz, who’d encouraged him to leave Ellington two years earlier, produced a studio jam session featuring the alto triumvirate of Hodges, Parker, and Benny Carter (in that solo order), as well as the tenor players Ben Webster and Flip Phillips. Webster reached his mature style in the early forties when he came under Hodges’s influence as a member of the Ellington Orchestra. At the time of Hodges’s death, Webster said, “You pick up any record he made, he was always in tune. He showed me how to play my horn. That’s what I tried to do– to play Johnny on tenor.”

When Hodges returned to the Ellington fold in October 1955, Duke revived several of his signature tunes including “The Jeep Is Jumpin’,” “Stompy Jones,” and “Jeep’s Blues.” The latter was judiciously utilized to follow the sensational performance of “Diminuendo in Blue” and “Crescendo in Blue” by the Ellington Orchestra at the Newport Jazz Festival in 1956. Paul Gonsalves’s 27-chorus solo connected the two (“the wailing interval”) igniting a frenzy in the crowd, and Duke called for a tune that would both enchant and calm the past-curfew gathering. “Jeep’s Blues” was the right call, and captured on record, it stands as one of the greatest monuments of Hodges’s art. The tune remained in the book, and Duke invariably mentioned the “Newport Jazz Festival album” (his biggest seller) when he introduced it. On the occasion of this 1957 performance, he added, “I’m sure if you’ve heard of the saxophone, ladies and gentlemen, you’ve heard of Johnny Hodges.” As Hodges preaches, listen for Duke encouraging him to “Tell ’em what happened! Tell ’em what happened!”

For all the expressiveness of his playing, Hodges was a notoriously impassive figure on stage. But as one astute reader observed today on Facebook, “It never showed on his face, but that multi-textured sound had to come from some deep, deep soul.” In Dance’s volume, Rabbit’s colleague Harold “Shorty” Baker knowingly offered this summation of his artistry. “Nobody knows what Johnny Hodges feels when he walks out to the mike. He may look as though he’s on his last walk to the gallows, but he appreciates the applause and thanks the audience with a million dollars worth of melody.”