Our travels took us from Bologna to the towns of Busseto and Cremona. Busseto is hometown to Giuseppe Verdi, including not only the house where he was born, but also the church where he began his public “performing” by playing organ for Sunday services. The house and church are actually located in Le Roncole, today known as “Verdi Roncole”.  The house “Casa Natale del Maestro”, is where Verdi was born on October 9th (or 10th), 1813. It was made a national monument in 1901.

In spite of his later fame as a composer, Verdi remained in the area for nearly his entire life.  When rumours circulated that he was planning a move to Paris, Verdi wrote to a friend, “I was, am and always will be a peasant from Roncole.”

While in the town of Busseto, we were treated to a recital of Verdi’s music, sung by a lovely soprano and her piano accompanist. I’m terribly sorry that I didn’t get their names, but trust me, they were first-rate, and our group really enjoyed the recital, which was held in the salon of Verdi’s patron, Antonio Barezzi.

After the recital, we had a fantastic lunch at a restaurant that Luciano  Pavarotti loved to visit when he visited the area.

On our way back to Bologna, we travelled down the Po river valley to the Modena area. Our goal was a visit to the AcetaiaVilla San Donnino, where traditional balsamic vinegar is produced. Our host, Davide Lonardi, explained the distillation process of the balsamico, showing us the many barrels in use, and giving us a taste of the results.

An added bonus – Davide welcomed us into his house, which had been used as a setting in the movie “1900”. We were shown the lovely entryway, and the stunning dining room, which had been used in the film. One thing I was amazed at was the family’s collection of Art Nouveau serving pieces which were on display. Of silver, they were beautifully placed on sideboards and shelving, all around the room.  All I kept thinking was, “it would take FOREVER to polish all those pieces”! I’m just glad no-one offered me the “honor” of doing so…

Our next destination was Cremona, birthplace of Claudio Monteverdi, but perhaps most famous of all for the incredible violins produced there, by famous makers Amati, Guarneri, and of course Stradivari. We headed to the Stradivari Museum, which has an incredible collection of over 300 instruments – violins, violas, cellos – crafted by the most famous violin making families ever. The best part? The collection’s instruments are ALL PLAYABLE! They don’t just sit in the cases. In fact, while we were touring the collection, we watched as a young man, with a violin case in his hand, and accompanied by a guard, approached one of the display cases. Our guide told us that the violin they were taking from the case was the one we would shortly be hearing played for us! And shortly after, we were ushered  into a marvelous music hall, where a young girl proceeded to play a recital using that very violin. The instrument was an early Strad, and as the first notes shimmered into the room, the hairs on my arms stood out – we were hearing a centuries-old instrument in music by Bach, Elgar and others. The young musician explained that the violin was really very versatile, able to play music of any time period, but that the player had to adjust their playing style to bring out the best in the instrument. 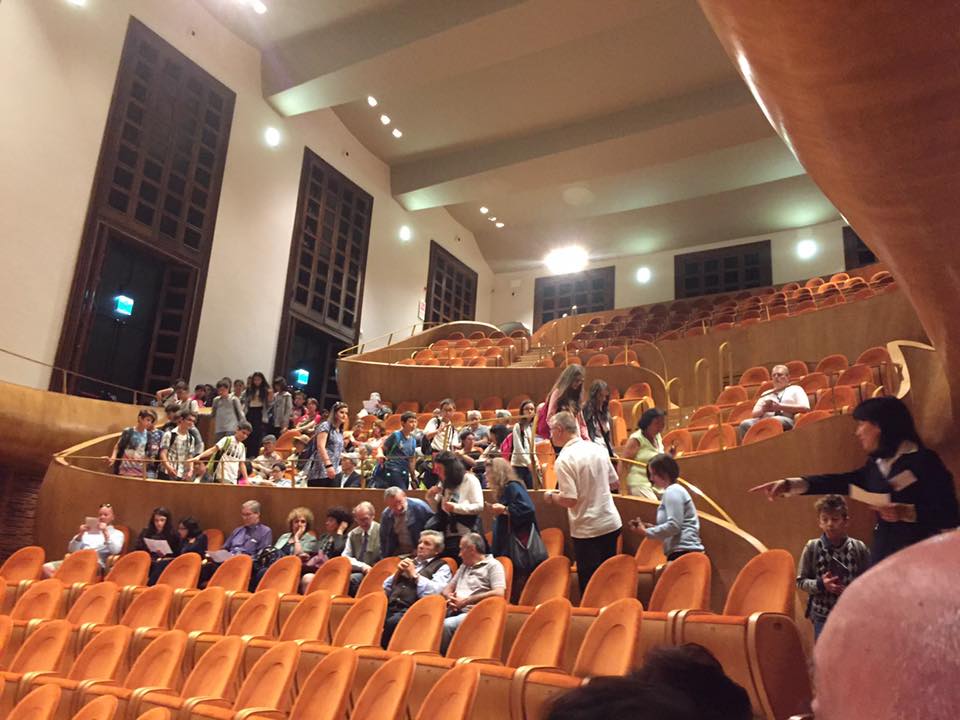 I wish we could have taken a picture of the young player and the Strad, but that was not allowed. In fact, one audience member DID try to take a picture of the Strad by itself, but the guard placed herself between the would-be photographer and the precious violin, and frowning, made it perfectly clear that the instrument was “unavailable” for photo ops.

Next time: Lake Como and the end of our WONDERFUL trip…