Very simply…three nights in Venice is NOT enough! In fact, I shudder in absolute horror when I hear people planning on spending just one night, if even THAT much, on a visit to Venice. PLEASE…if you visit La Serenissima, do yourself a HUGE favor and plan on spending at LEAST three nights there. Preferrably more. That way you can truly savor the Queen of the Adriatic and all the marvels you’ll find there.

We departed Venice after three wonderful days exploring the art, music, food, and charm of that most beautiful place. The day was cloudy, and we had some rain showers as our vans left the lagoon. I must have looked sad because our guide, Natalia, said to me that the rain was Venice shedding tears because I was leaving her. (She was probably right!).  We were on our way to Bologna, via Ravenna, and I was looking forward to returning to that marvelous place.

The city of Ravenna was aligned with the Byzantine Empire after the collapse of the Roman Empire. The city formed the center of the Byzantine Exarchate of Ravenna until the invasion of the Franks in 751, after which it became the seat of the Kingdom of the Lombards.

It is a UNESCO World Heritage site, and has incredible buildings dating from the 4th century onwards. Our tour took us to one of the earliest buildings, called the Mausoleum of Galla Placidia.

She was the daughter of Emperor Theodosius I, and was not actually buried there. While there are three sarcophagi in the building, it’s known today for the splendid mosaic decorations of the interior.

Nearby is the beautiful 6th-century church of San Vitale.  It, too, has magnificent mosaics inside, along with frescoes and beautiful marble walls & pavements. 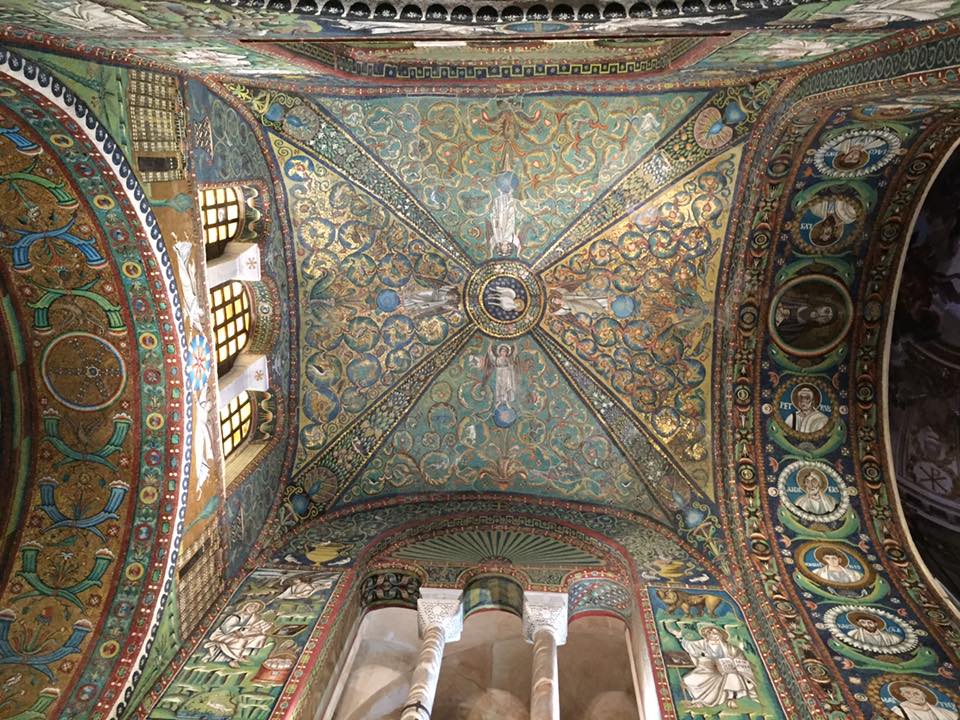 We also visited Sant’ Apollinare Nuovo, with it’s mosaics of a procession of “Brides of Christ”, and other figures, all in beautiful mosaic.

After a lovely lunch, it was off to Bologna and our hotel, ‘Ai Capello Rosso’, or The Red Hat.

Our time in Bologna was truly wonderful. Our hotel was literally steps away from the Piazza Maggiore, which is faced on one side by the huge church, San Petronio. Begun in the late 13th century, the facade today remains unfinished. We spent some time exploring the cavernous interior – truly impressive!

Afterwards,  we made our way to the “Civico Museo Bibliografico Musicale”, a musical library and museum collection famous for housing such treasures as Rossini’s original copy of ‘Barber of Seville’, Mozart’s music exam that he failed, priceless copies of printed music, along with famous portraits of Vivaldi, Mozart, Rossini, Farinelli, and countless others who are of great importance in music history.

While there the museum was closed early, and we were treated to a special concert of 17th century music performed by a wonderful violinist and theorbo/baroque guitarist. I’m sorry, I don’t have pictures of them. They played in front of a case that held instruments from the same period as the music we were listening to. It was heavenly!

Next Installment – On to Busseto and Cremona!