Tuesday is an off-night for the World Series, so I can’t think of a better place to be than Amherst Cinema for the screening of a new documentary on Erroll Garner, No One Can Hear You Read.  The title of Atticus Brady’s film refers to Garner’s inability to read music, but this hardly detracted from his “being a genius,” as Whitney Balliett’s New Yorker profile of the pianist was titled.  In addition to his amazing chops and utter originality, Erroll composed “Misty,” “Afternoon of an Elf,” “That’s My Kick,” and several other songs and jump tunes.

In the film, Steve Allen, who often hosted Garner on his television show, hails the “freakish degree of his superiority” over other pianists, and says, “Those of us who do this for a living know that some of what he did was impossible.  But he did it.”

Here’s a good example of what Allen means. The 35-minute set is Garner at his greatest beginning with an intro to “Honeysuckle Rose” that includes stunning passages of boogie-woogie and stride.  That’s Eddie Calhoun on bass and Kelly Martin on drums.

Woody Allen, another fan, says that Garner’s playing was imbued with a feeling of emotional uplift; as an example, Brady incorporates a scene from an Allen movie in which a newborn is being lowered into a stroller and all one hears is Erroll, no dialogue needed.

Maurice Hines, who recommends Garner’s music to tap dancers at every skill level, says “he was a genius who drew you to him.”

Garner was Johnny Carson’s favorite jazz pianist.  In a scene from one of the dozens of appearances he made on the Tonight Show, Carson asks him, “What makes you so distinct and instantly recognizable?”  As Erroll searches for something to say, Johnny turns and asks, “Ross, what would you say it is?”  Tonight Show pianist Ross Tompkins replies, “Happiness.”

Happy is the overall mood of No One Can Hear You Read, but Garner’s story has its poignant elements.  His sister Marion relates how she was working as a domestic and could hear a recording of Erroll playing in the background.  The lady of the house came to her holding Concert By the Sea and asked if she knew of the pianist whose name she shared? It was the first time Sis had heard Erroll’s biggest-selling LP.  And while Garner never married, he fathered a girl who admits that he didn’t pay much attention to her, but she’s sure that “In his heart, he loved me.” 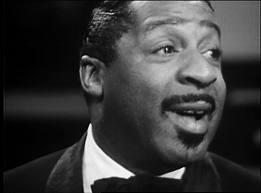 In 1956, Garner, who was the sole client of his personal manager Martha Glaser, became the first jazz artist to be booked by the classical music impresario Sol Hurok. Jazz critic John Murph describes this as a “Jackie Robinson step” for blacks in show business.

Garner famously sat on a Manhattan phone directory to give himself a boost on the piano bench. Ahmad Jamal, who, like Erroll, is one of the piano greats born in Pittsburgh, says that his compatriot “was a giant even without the phone books.”

Garner has become something of a neglected figure since his death in 1977, but it doesn’t take more than a few bars of his music to feel its irresistible pull.  (Note that nearly 300, 000 people have viewed the performance above.) Experience it for yourself on Tuesday at Amherst Cinema.  Jeff Holmes, Director of the Afro-American/Jazz Studies major at UMass, will play a solo piano set at 7; the film follows at 7:30. Holmes told me last week that the first jazz LP he ever purchased was by Erroll Garner.

I’ll be there to introduce the film and host a Q&A afterwards.  See you at the movies.