Howard Brofsky, who died on Thursday at 86, was a professor emeritus of music at Queens College. He earned his Ph.D. in 18th century Italian classical music and was an authority on Padre Martini, one of Mozart’s teachers. But he was also captivated by the music of his time and place, bebop in mid-century New York City, and by its leading figure, Charlie Parker.  As new biographies of Bird by Stanley Crouch and Chuck Haddix remind us, Parker was one of the most galvanizing figures in 20th century music, and Howard pursued him with a passion, transcribing his solos and developing his own mastery of modern jazz.  Thus he enjoyed a dual identity as a musicologist and as a trumpeter affectionately known as Dr. Bebop.  As a jazzman, he made music with many of the legends, including Dexter Gordon, Joe Albany, and Jimmy Heath, and for years he played in the ensemble of painter and saxophonist Larry Rivers.  Drummer Jimmy Wormworth said he was “a legendary New Yorker for cats in the know.” 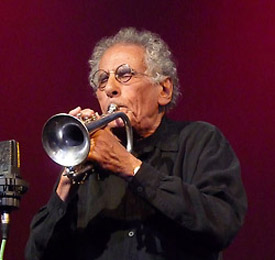 Howard was best known to the jazz community in Western New England as a guiding force behind the Vermont Jazz Center. The VJC was founded by his friend Attila Zoller in the 70’s and Brofsky first came to the area to assist Attila with its operation. After retiring from Queens College, the Brooklyn native called Brattleboro home for about 20 years, and during that time served as the VJC’s board president and helped bolster its reputation as a thriving concert presenter and educational facility.

I enjoyed a lively correspondence with Howard over the years, especially around the mutual love we had for Louis Armstrong.  When I included a lesser known Hot Five recording on one of my desert island lists a few years ago, Howard wrote to say, “I’ve been meaning to write since you posted a list of “favorites” which included ‘Tight Like This.’ I have always thought that that was GREAT Louis, and was underappreciated by everyone writing about him. It may be the longest solo (other than solo piano) on record at that time; it is brilliant and passionate; he plays on only two chords, anticipating the modal stuff from the late 50’s; and he builds the solo with such rhythmic variety and subtlety. It brings tears to my eyes.”

Though he returned to New York in recent years, Brofsky maintained his connection with the VJC and continued to play the annual spring concert that coincided with his birthday. For these, he recruited musicians from the New York scene including Jimmy Heath. Jimmy and Howard co-celebrated their 85th birthdays at the VJC on May 19, 2012.  Both were in good spirits and excellent form, and highlights included a lyrical, five-chorus solo that Howard played on his ballad feature, “More Than You Know.” In the brief note I scribbled in the dark that night, I wrote, “Howard is still a great storyteller.” Another was Heath’s variation on “Autumn Leaves,” which he humorously called “Winter Sleeves.”  With Howard’s death last week, Jimmy told the VJC’s director, Eugene Uman, “I feel like I lost my brother.  Dr. Bebop gave me a new life and I will always be grateful and humbled by what he did for me.”

Heath was alluding to the leadership role that Brofsky played in launching the Master’s program in Jazz Performance and Composition at Queens College, where the faculty came to include Donald Byrd, Sir Roland Hanna, Sheila Jordan, and Heath. 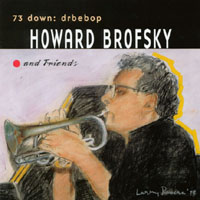 Howard’s legacy at Queens also includes the Louis Armstrong House Museum, a major repository of all things Satchmo.  Here’s how he recalled his role in its establishment: “In the late 80’s, I was contacted by a dean at Queens about visiting the Armstrong house in Corona. After Lucille’s death in 1983, there being no heirs, it was left to the city, and they in turn wanted Queens College to take it over. My colleague, Maurice Peress [a conductor and Ellington expert] and I went with the dean to see the house.

“We were bowled over by the trunks filled with photos and scrapbooks, boxes with hundreds of reel-to-reel tapes, big band books and other music. The dean’s reaction was: ‘Who wants this white elephant, a house in a run-down neighborhood in Queens?’  Maurice and I knew differently, and we prevailed on the president of the college that this was a national treasure that must  be preserved. From there I found Michael Cogswell at North Texas State, and he was the perfect person to take over the archives and get it off the ground.”

Today “the white elephant” is a National Historic Landmark, and its research and educational programs are administered by Queens College.  It’s also a popular tourist destination that receives visitors from around the world every day, and its collection of Armstrong memorabilia has been the basis for several publications, including Satchmo: The Wonderful World and Art of Louis Armstrong  by Steven Brower.

Eugene Uman wrote about Howard last week: “His love for others was communicated through words and deeds, but was most clearly expressed by the vulnerable and beautiful sounds he coaxed from his cornet.  A gentle man who left behind a staggering legacy of accomplishments, Brofksy’s crowning achievement was that he was an authentic man, a loving father, husband, friend and mentor.”

Join me for tonight’s Jazz a la Mode, where we’ll hear selections from Howard’s CD, 73 Down: DrBebop, including “The Open Door,” “Body and Soul,” “Dark Eyes,” “Polka Dots and Moonbeams,” “I’m Old Fashioned,” and “If I Had You.”  Sidemen include his son Alex, a French horn player, as well as Jimmy Heath, Atilla Zoller, Larry Willis, Michael Formanek, Joey Baron, Eliot Zigmund, and the late Dave Shapiro.  Dr. Bebop, Rest in Peace.