Evan Christopher was back in New Orleans this week in time to don his “blacks and whites” for the final second line tribute to Uncle Lionel Batiste, a beloved member of the Treme Brass Band who died on July 8 at age 81.  Christopher’s music has been a staple of Jazz a la Mode for a decade, and I’ve delighted in seeing this brilliant, flamboyant, and deeply engaging clarinetist in person on a few occasions in New Orleans and New York.  I spoke with Evan this week in anticipation of his appearance at the Newport Jazz Festival on Saturday, August 11, where he’ll share the stage with Anat Cohen and Ken Peplowski in the group billed as 3 Clarinets; pianist Ehud Asherie, guitarist Howard Alden, bassist Greg Cohen, and drummer Lewis Nash will make it an all-star septet. 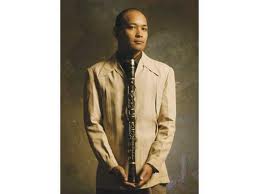 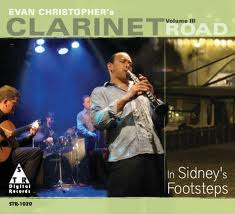 Christopher was born in Long Beach, California in 1969 and began playing jazz as a teenager under the tutelage of Marshall Hawkins at the Idyllwild Arts Academy.  Kenny Davern and Tony Scott were among his well-known mentors, and in 1994 the Clarinet Road brought him to New Orleans where Evan settled into a musical hot house that helped clarify his stylistic direction and purpose. Since then, he’s focused on what he calls “contemporary early-jazz,” a style that builds on the Creole clarinet legacy of Lorenzo Tio, Sidney Bechet, Jimmie Noone, Barney Bigard, and others.

One of Evan’s early gigs in New Orleans was playing on a Mississippi riverboat, an experience that led to his recognition of how “playing New Orleans music was already being relegated to the fabric of tourism and hospitality. I was kind of immediately frustrated by that and it took me many years to figure out how to start to see around that and to see other possibilities. I’ll say that it wasn’t until the failure of the Federal levees in 2005 [Hurricane Katrina] that I was kind of forced to take a look at it and think about it in different ways.”

What Christopher’s “way” represents is jazz of a rich, rarefied order, incorporating elements from the musical cultures of Spain and France, the Caribbean, Brazil, Argentina and the U.S.A.—blues, rags, and stomps, tango, Choro, bossa nova, Django jazz, even The Peacocks.  But for all its cosmopolitan flavor, Evan’s music is too often taken for granted as “traditional,” or as a variation on the proverbial Crescent City musical gumbo. Throughout its history, New Orleans musicians have often displayed a chauvinism about their music that smacks of the provincial, but a similar attitude infects the views of outsiders who can’t see beyond Preservation Hall.  As a result, the innovative and stylistically expansive work being done by Christopher, Tom McDermott, Irvin Mayfield, Astral Project, Donald Harrison and others tends to be overlooked, not only by the NOLA Chamber of Commerce but by the New York-oriented jazz establishment. 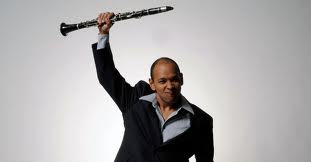 As for New York-based jazz players, Christopher says that Big Easy musicians would benefit by hewing to the more demanding levels of musicianship characteristic of the Big Apple.  While crediting New Orleans musicians with having “a handle on how to connect with people, the other has a handle on how to play the instrument. I think we could learn a lot from each other, but somewhere in the middle is where the future needs to be.”

Evan elaborates on this and other matters of making music in New Orleans and sharing it with the world (he’s billed as Evan “The Ambassador” Christopher on a recent recording with the New Orleans Jazz Orchestra) in our conversation for New England Public Radio.  And you can read here about Christopher’s recording with pianist Tom McDermott, Almost Native, which Evan explains the “double-entendre” nature of in the interview. 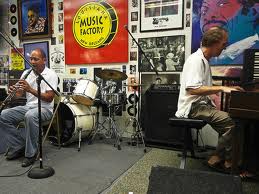