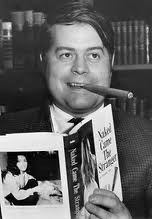 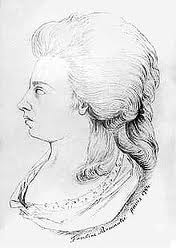 Today’s New York Times features an obituary for the late Newsday journalist Mike McGrady.  Meanwhile, today’s WFCR classical music opened with a popular violin work, the “Sicilienne” by Austrian pianist-composer-singer Maria Theresia von Paradis.  What does the cigar-chomping newsman have in common with the blind musician who premiered one of Mozart’s concertos?  They were, at different times, on opposite ends of a case of artistic fraud.  McGrady (above left), you see, was the lead perpetrator of “Naked Came the Stranger,” a steamy, sex-filled novel that sold  20,000 copies in the summer of 1969 before McGrady revealed that he and 24 Newsday colleagues, not “author” Penelope Ash, had written it.  On the other hand, Paradis (above right), who left behind a small but not negligible body of vocal and instrumental works, posthumously became in the 1960s the “composer” of the lovely Sicilienne which is now her only well-known work.  Except she didn’t write it.  Who did? 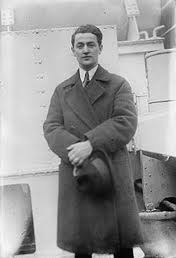 Mostly likely, the “Paradis” Sicilienne was the handiwork of Samuel Dushkin (above), the Polish-born American violinist best-known for premiering Igor Stravinsky’s most important violin works.  When the work first appeared in print, Paradis got credit as its composer, Dushkin as its editor.  While Dushkin never admitted it, he almost certainly wrote the piece himself, basing it on a movement of a Sonata by Carl Maria von Weber.  And that may not be the only time Dushkin pulled a fast one on the classical world by making up a work he claimed merely to have edited.  It seems that he may have done much the same thing with a Violin Concerto “by” Johann Georg (Jan Jiří) Benda, one of the lesser-known members of a well-known 18th-century Czech musical family.  I haven’t seen proof one way or the other; my guess after listening the the Naxos recording by the late violinist Josef Suk is that the first two movements may be genuine 18th-century, but the violin writing in the finale sounds anachronistically romantic.  No proof, just a guess.

But if Dushkin indeed had perpetrated such deceptions, whether once, twice or more often, why did he do it?  The obvious motive would be to increase music sales, since a “discovery” of a new work by an 18th-century composer, even a lesser-known one, provides more cachet than yet another new work imitating an older style.  Would the same Sicilienne under Dushkin’s name have become such a hit?  I doubt it, and I say that as someone who enjoyed the piece many times before finding out that Paradis didn’t write it.  And how canny it would have been for Dushkin to ascribe these works to lesser-known composers, since the names of Benda and Paradis would not have raised the same red flags as those of, say, Haydn or Mozart.  The same trick worked like a charm for Italian musicologist Remo Giazotto, the “discoverer” and “editor” of one of the biggest hits of the “Baroque”, the Adagio in G minor “by” Tomaso Albinoni.  I’m getting a headache from winking so often! 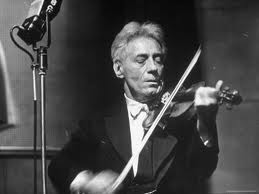 On the other hand, the all-time champion of such musical fraud gave different reasons for parading his works about under the names of others.  After admitting to the New York Times that he was the real author of the many works he played “by” obscure old masters, violinist Fritz Kreisler (above)  explained that his desire was to present well-balanced programs not just of his own works, that no one would have taken these pieces seriously if they appeared under his name, and that it didn’t really matter if the listener liked the music.  Well, when Kreisler let out the truth about his fabrications, some who thought they should have known better, especially the renowned critic and ardent Wagnerian Ernest Newman, were deeply offended, others were amused, most took it in stride.  Kreisler’s hoaxes, which are indeed delightful works, remain the the violin repertoire, usually under such names as “Minuet in the style of Porpora” and “Preghiera in the style of Martini.” 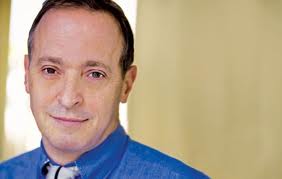 So it’s all good.  Or is it?  Take for instance the current case of humorist David Sedaris (above), who has lately been under light fire in the press for labeling his largely invented stories as non-fiction.  “What’s the difference if his pieces are true or not,” Sedaris’s defenders say, “if they’re funny?”  To which I would reply with another question, which I would ask that you answer with total honesty, if only to yourself:  Would you have thought Sedaris’s stories were quite as funny if you knew from the git-go that there was absolutely no chance that they were true?  Labeling a story fact instead of fiction fundamentally changes the reader’s expectations of it.  And change the label back from fact to fiction, and humor that relies in part on its seeming implausibility (“That really might have happened?  What a scream!”) loses some of its edge.  I have similar reservations about Dushkin and Kreisler.  They tricked and even embarrassed their audiences.  And unless the audience is in on the joke from the start, that’s not a very nice thing to do.

But then, if the perpetrator of the fraud owns up, and you can admit to yourself that you were taken in, you might as well laugh and move on.  And remember the rule, whenever someone says he’s discovered a new Beethoven Piano Concerto:  Caveat Emperor!