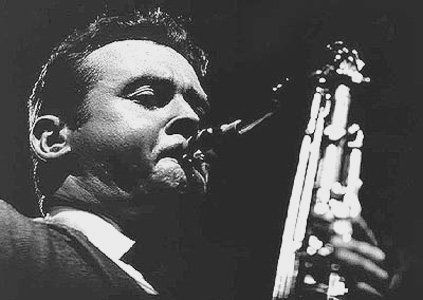 Stan Getz recorded two masterpieces in 1961. The orchestral work, Focus, is the better known of the two, and was the saxophonist’s personal favorite from his vast discography. The second, Stan Getz-Bob Brookmeyer ’61, reunited Getz with valve trombonist Brookmeyer and introduced his new rhythm section of Steve Kuhn, John Neves, and Roy Haynes.

Getz was looking for new challenges in 1961 after returning from a three-year sojourn in Europe and residency in Denmark.  During that time, John Coltrane had come to the fore as the dominant stylist among tenor players, and by 1960 Trane had begun to outpoll Getz inDownbeat and Metronome, where Getz had held the top rank for a decade.  Coltrane exerted a powerful influence on many established players at the time, but the self-assured Getz held fast to the cool lyricism he’d honed over the previous 15 years, and by 1962 his album, Jazz Samba, established a vogue for bossa nova and Getz's tenor became its leading instrumental voice.

Focus showcases Getz as the soloist on a suite composed by Eddie Sauter. Getz first came to admire Sauter’s writing when the two were with Benny Goodman in the mid-40’s, and he shared the bill on a few occasions with the acclaimed Sauter-Finegen Orchestra in the 50’s.  Getz felt that Sauter’s was a talent deserving wider recognition, so he commissioned this new work, encouraging Sauter to avoid “arrangements on standards, pop songs, jazz classics. [Make it] your own original music, something that you really believe in.”

Sauter responded with a work in seven movements that, in Getz’s estimation, showed “quite clearly that the legitimacy of the last 300 years and the soul of our modern times can be put together and be beautiful.”  In this respect, Focus fulfilled what Gunther Schuller proposed in the late 50’s as Third Stream music, a confluence of jazz and classical, and it remains a singular achievement. Getz’s restless interactions with Sauter’s intricate orchestrations impressed the composer as prime examples of Getz’s “sympathy and sensitivity,” and their collaboration marked a substantial advance over the more conventional soloist-with-strings projects that had been utilized for Charlie Parker, Clifford Brown and others.

The consistency of invention and engagement displayed on Focus was also present on Stan Getz-Bob Brookmeyer ’61, which found Getz reuniting with Brookmeyer, the valve trombonist he’d worked with seven years earlier.  The album’s rather bland title conceals a recording of exceptional quality.  Getz’s performance of “A Nightingale Sang in Berkeley Square,” ranks with the finest of his romantic ballads, while Brookmeyer’s original “Who Could Care” features a moving dialogue between the two principals.  And the trio of Kuhn, Neves and Haynes featured players who could match Getz’s brilliant intensity with their own creative fire.

Getz and Coltrane were part of a Jazz at the Philharmonic package that Norman Granz presented in Europe in 1960.  Trane was with Miles Davis; the other groups included Getz’s quartet and Oscar Peterson’s trio.  Biographies of Getz and Coltrane tell of Trane’s reluctance to join in the kinds of jam sessions that were a hallmark of JATP, and for years it was assumed that Getz and Trane didn’t play together on the tour.  But a few years ago a video of the two of them playing “Hackensack” with Peterson and the Davis rhythm section of Paul Chambers and Jimmy Cobb surfaced, and here it is.  Notwithstanding the professional rivalry that's inevitable between contemporaries in any art form, Trane and Getz apparently held each other in the highest regard, and Trane reputedly said of Getz's sound, "Let's face it, we'd all sound like that if we could."